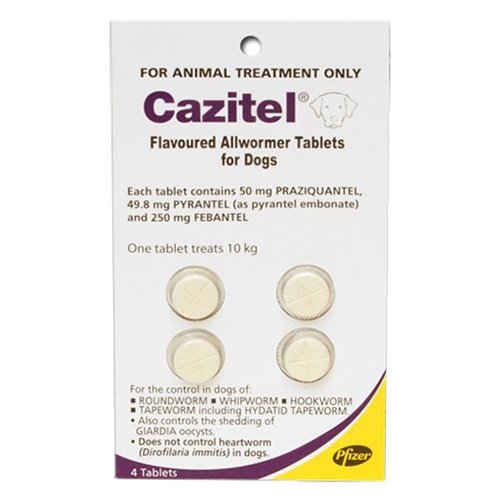 One of the most popular dewormers, Cazitel flavored tablets help in destroying a wide range of intestinal worms in dogs. The unique formulation kills and removes different types of gastrointestinal worms such as hookworms, tapeworms (including Hydatid tapeworms), roundworms and whipworms. Cazitel not only treats but also protect dogs from 12 species of intestinal worms. Being gentle and safe, this allwormer tablet treats all breeds of dogs including puppies, breeding, pregnant and lactating bitches.

How does it work?

Cazitel contains three key components – Praziquantel, Pyrantel Embonate and Febantel. Each ingredient works simultaneously in destroying internal worms present in the intestinal tract. When these worms are paralyzed and dead, they are eliminated from your dog’s body through its natural system.

Killing 12 species of intestinal worms in dogs, Cazitel protects them from the dangerous effects of these worms. This anthelmintic formulation is effective in restraining the spread of Giardia infection in dogs. Cazitel allwormer works on all types of worms except heartworms.

My dog got heavily infested with the worms and my vet recommends this product. It really helped me to eliminate many gastrointestinal worms irritating my furry friendl

wormer flavored tabs quite easy to dose our furry dogs.

NOTHING WORKS LIKE THIS AS IT ALWAYS KEEPS THOSE WORM AWAY

Best brand to rely on when it comes worm treatments.

best allwormer to find for our dogs.