Mega Sales on Independence Day by CanadaVetExpress: Get 15% Price Reduction on All Pet Care Supplies Do you know the fact that dogs have aided soldiers in every major war in our country’s history, starting from the Revolutionary war where they were accompanied by owners in the battle? These dogs not only acted as worthy companions, but also protected people from wild animals along with hunting for food. The other interesting fact that you might not be aware about is even George Washington was a great lover of dogs and owned many during his lifespan.

During one such Battle of German-town (a part of American Revolutionary War) many soldiers were wounded and dead. In the aftermath, General Washington saw a little Terrier wandering around the area between the British and American lines. Seeing his friendly nature General Washington got fondness of the furry pal. But he saw a collar on him with a tag identifying him belonging to the opponent, British General William Howe. While our soldiers wanted to keep the doggy as a war trophy, General Washington did not like the idea. He asserted that Americans were people of honor and the little furry pal should be returned back to his rightful owner.

General Washington with the aid of his subordinate, Alexander Hamilton wrote a letter to General Howe informing him that his doggy will be returned. A truce was then established where both the sides flew white flags and the fighting ceased, and the terrier was delivered to the side of the British. After that day General Howe showed more compassion towards the colonists and when he was prompted to fight longer and harder against us, he resigned.

This is one of the chapters of the great deeds performed by dogs and these furry pals were the catalyst in making us win our independence from the British. Hence, on this day of Independence day CanadaVetExpress recognizes the bravery, loyalty and undivided adoration performed by our canine companions towards soldiers and offers 15% discount on the site-wide pet care supplies.

CanadaVetExpress is one of the most reputed online pet stores in USA. It has made a name in the pet care supplies market by providing cost-effective pet products for dogs, cats, and birds in categories including: flea & tick control, heartwormers, joint care, wormers, wound repair, eye & ear, nutrition and pet vitamins with utmost quality and precision. The prices on the online shopping destination are already at the lowest when you get an additional 15% discount on top of the already curtailed rates it makes the purchase even more enticing. On top of it, there are no shipping charges on the purchase of the products so you do not have to shell even a single penny to get the product.

It is an ideal time for you to shower your love towards your furry pal and ensure that they get the necessary pet treatments during the federal holiday. You can even hoard these branded treatments for future purpose as you will not get such discount on any other store. It is that time of the year when you can save loads of cash on pet care budget so do not think twice. Rush now and shop for your preferred pet care supplies but do not forget to use the coupon code “Freedom“while making the purchase.

Pawsome Christmas Gifts for Your Dog

Cyber Monday: Shopping Tips To Get The Best Deals 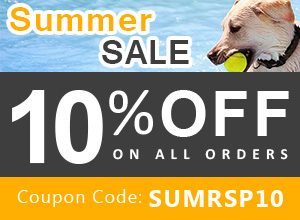