Do You Know Dogs Can See Colors? 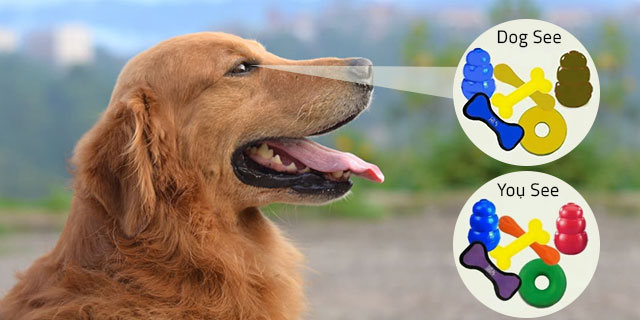 Have you ever wondered what colors do dogs see? Earlier most of the vets believed that dogs only see black and white. In fact, most of us thought or perhaps still think that dogs cannot see colors. But that is only partially true. Dogs do have a vision spectrum wherein they see shades of blue, yellow and grey. However, you cannot compare their vision to humans because humans are gifted with a wider color spectrum.

Owing to the biological reason that dogs possess only two types of color receptor cells or cones compared to three in humans, a dog’s world is certainly less bright than ours. The colors that dogs see somehow resemble the world where only blue and yellow pops out and the rest of it is grey. Although they do recognize different shades of greys, yellows, and blues but there vision is not capable of perceiving reds, pinks, purples, and greens. They have a dichromatic vision which allows them to see just the three colors.

However, do not underestimate their capabilities. Dogs rather have better ability to see things in dim lights and are able to detect movements more easily than us. Other than that, dogs are more efficient in understanding the different shades of grey. Their wider field of vision allows them to see things at 240 degrees compared to 180 degrees of humans.

So now that you know what colors do dogs see, it is easier for you to select things for him accordingly. A toy which is in yellow color will seem more enticing to your dog than a red or other colored toys. A blue pill would be more interesting to eat than a green one.

Many a time you may have felt that your dog is acting obstinate when you throw a ball across him and he doesn’t respond?  Well, though it may be disappointing to you but for dog – he probably might have not seen the ball at all because if it is of the same color that he sees of grass, then he probably unintentionally skipped watching it.  To understand it more perfectly, here is a sneak peek at the dog’s way of visualizing things. 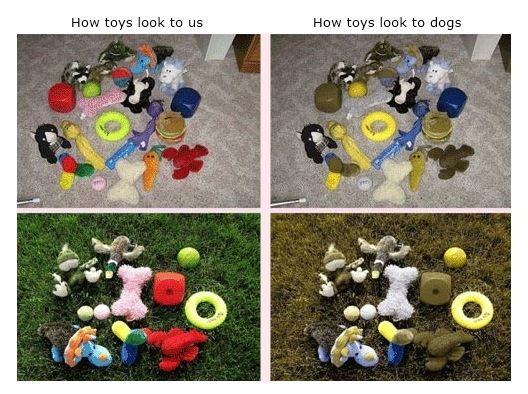 You may also like to read What Is the Effective Way to Take Care of Dog’s Eyes?

Common Dogs Diseases and its Prevention