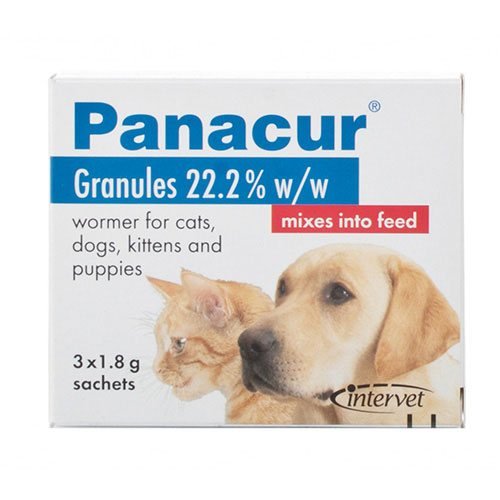 Panacur Granules for Cats and Dogs

Panaur granules is a broad spectrum treatment for dogs and cats. It kills and removes gastrointestinal worms as well as respiratory tract infections. The oral formulation is highly effective on roundworms, hookworms, whipworms and tapeworms.

Panacur contains Febendazole as a key ingredient. The anthelmintic effect of this component provides a faster remedy to gastrointestinal worm infection as well as respiratory tract infections. Febendazole obstructs the energy metabolism of the disease causing parasites. The key ingredient also speeds up the ovicidal effect twice that kills nematode eggs. Thus, Panacur helps in the management worm infection in dogs and cats.

Panacur granules are highly effective. we usually treat our dog every three months with this treatment

Dewormer and more, great to mix in meals and treat our boys

Kelvin happy to use it again

I used it before and worked well,. but i forgot to deworm again at regular intervals so my PEG got badly infected but this time I wont miss the regular treatments,. Happy to use agian.

No adverse effects what so ever. Getting ready to buy another. Well worth it!

smoothly mixes in the meals, so never have to worry about dosing fuss.